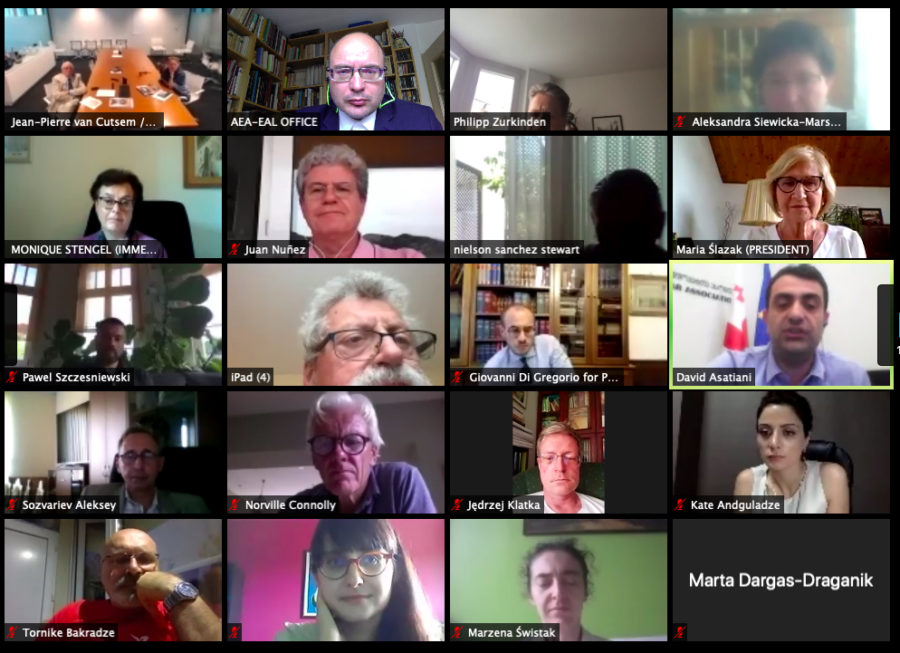 Due to Covid-19 pandemic, and restrictions imposed by the Belgian law, the 2020 AEA-EAL General Assembly had a hybrid form: the Chair of the Assembly, the AEA-EAL Treasurer and secretary of the meeting were present in Brussels in the AEA-EAL premises, while all other members participated online.

We hosted a special guest, Sophie Moonen, Head of Unit (COMP.F.2) in the European Commission, Directorate General for Competition. Sophie delivered a speech on new approach of the Commission towards competition policy in aircraft transport sector.

Maria Ślązak, AEA-EAL President, presented a report from Association’s activity in 2019 saing among others, that:

President said thank you words to all AEA-EAL members for their contribution and involvement in Association’s works.

Sabine Perquy-Forke, AEA-EAL Treasurer reported on financial situation of the AEA-EAL pointed out that growing network of members makes finance of the AEA-EAL stable. She followed information of the President that the number of members is still increasing and noted this mainly thanks to the continuity of: (1) the quality and the diversity of our conferences, including more and more countries, especially from Eastern-Europe and Asia, (2) the constant efforts of the management and the marketing committee, intensely assisted by Rafał Ciesielski, to maintain our communication towards our members and towards third parties and to promote the activities of our association, and (3) the huge personal engagement and personal efforts of our president, Maria Slazak and our secretary general, Aleksandra Siewicka-Marszałek.

AEA-EAL members approved unanimously both Reports and discharged AEA-EAL Directors for performing their functions in 2019. Also, AEA-EAL accounts for the previous year were approved as well as new budget for 2020.

In discussion, members strongly supported opening of the Association for lawyers from other continents and, in particular, for colleagues from Eastern Europe, Caucasus and Central Asia. Some proposals were submitted to organize events directed to particular language communities or regions. As a result, a webinar for Spanish-speaking audience was organized in July. Other online events for French and Russian speaking audience are planned including Twinning of Lawyers on September 12, 2020.