The Opening of the Legal Year organized each January is a very long tradition of the Hong Kong Law Society In the past, it always was a huge ceremony gathering judicial and governmental officials, representatives of the legal profession as well as distinguished guests from abroad. This year, due to the well-known circumstances of the coronavirus pandemic, the celebration had a hybrid form. On January 11, 2021, the main ceremony took place. On the premises of the Supreme Court of Hong Kong gathered main representatives of the Judiciary and the government while the ceremony was broadcasted online the internet. The main speech was delivered by newly appointed Chief of Justice Mr Andrew Cheung, who defended judicial independence in the context of rising attacks on judges. Chief Justice stressed that the Independence of the judiciary is crucial to maintain public confidence and Hong Kong’s reputation as the city governed by the rule of law under the principle ‘one country, two systems’. He also expressed his gratitude to his predecessor, Mr Geoffrey Ma Tao-li, who served as Chief of Justice for the last 10 years defending successfully independence and high position of judges in Hong Kong. During the ceremony, speeches were delivered also by Secretary for Justice Teresa Cheng Yeuk-wah,  Chairman of Bar Council Philip J. Dykes and  President of the Law Society Melissa Kaye Pang. 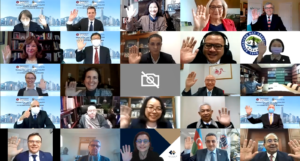 On January 12 the  Presidents’ Roundtable took place with the participation of leaders of the international organization of lawyers, bar associations and law societies. The main topic of this event was  Challenges and opportunities for the legal profession in the midst of COVID-19. Participants discussed the impact of the COVID-19 pandemic on the legal profession, how they responded to challenges and what long-lasting changes will influence lawyers and their professional practices in future. Speakers were presidents and high representatives of the International Union of Advocates (UIA), LAWASIA, American Bar Association (ABA), German Federal Bar (BRAK), French National Bar Council (CNB), The Law Society of England and Wales, Law Council of Australia and Paris Bar. AEA-EAL President Maria Ślązak touched on the issue of domestic violence, which raised dramatically in every country during the lockdown and imposed restrictions. She illustrated how lawyers, law firms and bars responded to the issue and which introduced practices and procedures should be maintained and developed in the future as domestic violence is still a growing issue. Further work of lawyers in this field is also our input into building a sustainable society in which everybody has a right to feel safe. The intervention of our President was very well received; in their opinion, the problem is not visible enough to authorities and the public and victims stay often alone, without any help. 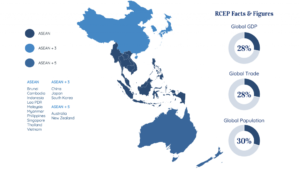 On January 13 a Leadership Insights Session took place devoted to opportunities for Hong Kong in Regional Comprehensive Economic Partnership and Hong Kong’s role in the Greater Bay Area. In November 2020, the Chinese government signed the Regional Comprehensive Economic Partnership (“RCEP”) Agreement with countries of South-East Asia, as well as Japan, the Republic of Korea, Australia and New Zealand. RCEP seeks to establish clear and mutually advantageous rules to facilitate trade and investment. On the other hand, China develops so-called the Greater Bay Area – integrating the Guangdong-Hong Kong-Macao area, where Hong Kong lawyers wish to play a key role in building legal infrastructure and legal culture.

Three days of celebrations and events highlighted still the relatively strong position of judges and lawyers in Hong Kong, however, the shadow of long-lasting protests in the city and the new  “security law” (giving the Beijing much stronger tools to control life in the  Hong Kong  Special Autonomic Region) was felt during the ceremony.