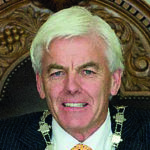 Irish Rule of Law International (IRLI) is a joint initiative of the Law Society of Ireland and the Bar of Ireland as well as the Law Society of Northern Ireland and the Bar of Northern Ireland, dedicated to promoting the rule of law in developing countries on a project-oriented, non-profit basis. IRLI seeks to harness the skills of Irish and Northern Irish lawyers in using the law as a means of tackling global injustice and empowering all people to live in a society free from inequality, corruption and conflict
Originally founded in 2007 by the Law Society of Ireland and the Bar of Ireland, the organisation has collaborated with academics, judges, legal practitioners, policy-makers and civil society around the world to advance collective knowledge of the relationship between rule of law, democracy, sustained economic development and human rights. IRLI was joined in 2015 by the Law Society of Northern Ireland and the Bar of Northern Ireland.
IRLI originated in the recognition of the importance of the rule of law for sustainable development and we believe that members of the Irish legal profession have a significant role to play in strengthening the rule of law and shaping the progress of fragile societies. IRLI has worked and is working in a number of countries for example Malawi.
IRLI has been working in Malawi since 2011, to address capacity challenges within the criminal justice sector with the overall aim of improving access to justice for unrepresented vulnerable persons. As part of this programme, Irish volunteer lawyers are seconded to or positioned strategically alongside the principal institutional actors in the criminal justice system: The Legal Aid Bureau, Ministry of Justice, Office of the Director of Public Prosecutions and the Malawi Police Service. Their work is also supplemented by volunteer lawyers based in Ireland, who provide short term intensive training for partner organisations.
The Malawi team is currently made up of Programme Manager Fran Flood, Programme Lawyers Macdara O Drisceoil, Tyler Holmes, Maya Linstrum Newman and Programme Officer Jolene Quinn. Two further volunteers are currently being recruited to support the team there.
In Malawi there is excessive use of pre-trial detention and the lack of a comprehensive legal aid system, amongst other factors, have resulted in overcrowding in Malawi’s prisons as well as considerably long detention times for prisoners being held on remand. Overcrowding in prisons is a prevailing problem across many nations in Africa, with the practice of holding prisoners on remand compounding the issue. As a result, in some countries a good majority of the prison population is made up of those awaiting trial. By reducing overcrowding, conditions for prisoners improve thus enhancing Malawi’s observance of the human rights of prisoners and remandees.
The poor of Malawi also face physical, financial and language barriers to legal aid. Most live in remote rural areas, live on an income of $1 per day, and do not speak English – the language of the court. With no representation vulnerable Malawians are often held in custody for months, or years, until a trial court acquits or sentences him/her.
In tackling access to justice for the poor, IRLI has sought to implement mechanisms in partnership with local actors to remove obstacles to free legal aid in the short-term (such as capacity constraints and shortage of lawyers) in order to bring about direct change at beneficiary level, while developing systemic, sustainable interventions aimed at providing long-term benefits to the wider criminal justice sector.
IRLI works to build capacity in the criminal justice sector and provide access to justice in the following ways:

 Working closely with advocates and officials in the Legal Aid Bureau to progress cases of remandees and juveniles, with a focus on children, women, the sick, and the elderly.

 Training of magistrates, police officers, social workers, advocates and paralegals in human rights and due process, restorative justice and diversion, case management and client care, as well as the protection of children and young offenders who come in conflict with the law;

 Supporting the Office of the Director of Public Prosecutions to improve case management systems, processing of homicide cases and writing of legal opinions.

 Working with the Malawi Police Service to strengthen diversion programmes in police stations in Lilongwe so that juveniles and first-time offenders of minor crimes are diverted from the already over-burdened prison system;

 Facilitating a Child Diversion Programme in partnership with Chisomo’s Children Club and the Ministry of Gender, Children, Disability and Social Welfare with a focus on reducing recidivism through correctional education;

The Malawi programme is funded by Irish Aid and the European Union.