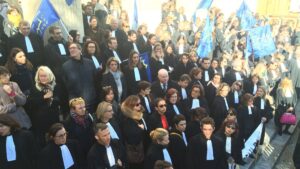 We invite you to read the interview with a unique person – Zaza Khatiashvili, past president of the Georgian Bar Association,
recognized throughout the world human rights defender and – in particular – defender of the independence of legal profession and individual lawyers, Winner of the CCBE Human Rights Award, great friend of the European Association of Lawyers (AEA-EAL) and speaker on its international Conference in Almaty (2018), where he shared information on how to defend lawyers’ rights.

You were not government’s favourite candidate for the post of the Chairman of the Georgian Bar Association (GBA) in 2009?

On December 27, 2009, I became the President of the bar association. Saakashvili’s government has interfered in the elections because they did not want a  human rights defender to become the chairman of the bar. Lawyers were threatened by the government by financial police and were promised a cash. They were forced to vote against me.  Before the second round, when Saakashvili’s government realized that I was winning, they offered me one million euros on the  condition that I would refuse my post.  I immediately made a statement. When I became the chairman of the bar, I wrote to the leaders of the “Big 8” that I was offered one million euros from the Georgian government. I demanded from the President of the European Union to recognize the President of Georgia Mikheil Saakashvili guilty for the persecution of lawyers.

How was a situation of lawyers in Georgia, at the beginning of your term of office?

When I became the chairman of the bar association I found that bar was  ruined, financially indebted, no ethics committee functioning, there was no bar training centre and most importantly 111 lawyers were imprisoned. The first thing I did was setting up a bar committee  and started investigation of  cases of imprisoned lawyers   to  find out that there was an institutional persecution of Georgian lawyers  by the Saakashvili regime. Nearly 4% of the then current 3,500 lawyers were in prison, which was not the case in any other country!

How have you and your colleagues  been fighting for lawyers’ rights? Which methods were the most effective?

I asked all  lawyers to call me  any time when their   activities were restricted..  Lawyers knew  that their chairman was with them and they became militant. In consequence  the authorities were forced to release all  illegally detained lawyers and our activities became safe.

In Georgia and in the European countries, during my time as the chairman of the bar, I  held about 50 rallies to protect  rights of lawyers. I went to a  lawyer several times because of a violation of his  rights and I always achieved the result. Finally, the government was  forced to back down. There were times when I thought I would not come back  home alive from manifestation, hunger and solidarity strikes, intervention or public protests but I never stepped back.

When the government changed in Georgia, I helped  two lawyers to be  recognized as a political prisoner by the Parliament of Georgia and they were  released. It  was a real confirmation of my struggle. When I was elected for the second time in 2013, Saakashvili’s government no longer ruled Georgia. Under the new government, there was also a lot of  pressure on lawyers, but not on the scale of the Saakashvili regime.

In 2014, one of the most influential police chiefs physically assaulted Public Advocate Giorgi Mdinaradze. I held a briefing in a few minutes and demanded an  arrest for the chief of   police  within 48 hours on the condition  of  calling   lawyers’ strike by not  going  to the court.. The authorities were so frightened that the police chief was arrested within 24 hours. If I had not started the lawyers’ strike, no one would have punished the police chief. He was sentenced to 5 years and is still in prison.

After my hunger strike in Strasbourg, the Georgian government was forced to agree with the Georgian Bar Association’s opinion on  nomination of a judge  to the European Court of Human Rights. This event made the bar association a great and accountable force.

Under the new government, through  struggle, rallies, and hunger strikes, we achieved legislative changes and made it a criminal offence to interfere in  work of a lawyer and to violate lawyer’s independence.

The European Union and the Council of Europe, the Embassy of the United States of America in Georgia helped me a lot. Council of Europe Commissioner for Human Rights Thomas Hammerberg has made a report on the persecution of Georgian lawyers, which is why President Saakashvili did not allow him to enter Georgia.

What is your advice for bars in other countries fighting for lawyers’ rights?

As the bar association turns a blind eye to a  restriction of one minor right of a lawyer, the government will destroy the corps of lawyers in that country.

The government in the last years of my term of office was forced to agree with our bar on any legislative decision if it was connected with the legal profession, which I achieved through great struggle. If the chairman of the bar association does not fight to strengthen the rights of lawyers, the development of the bar association in that country is going at a very slow pace.

What is the situation of Georgian lawyers nowadays?

When I left the presidency of the bar  after 8 years in power, none of the lawyers were in prison and that was my great victory. Today, the Georgian Bar Association is the strongest and most independent institution. I urge all lawyers to fight for our rights!

Lawyers of the Georgian Bar Association have become protected in the process of professional activity. We do not allow prosecutors to question  lawyers on their activity. A very strong  ethics committee was set up to punish unscrupulous lawyers. I set up a training centre, established a system of continuing  legal education that became mandatory for all lawyers.

When I hear about  persecution of  lawyers in any country, I  immediately hold a protest in Georgia in front of the embassies of the country where a  lawyer has been persecuted. So we saved the arrest of some of our colleagues from Kazakhstan and Ukraine.

Maria Slazak, the current president of the European Association of Lawyers (AEA-EAL), has been helping Georgian lawyers a lot.

I am very proud  that today the Georgian Bar Association is one of the most successful associations in Europe.