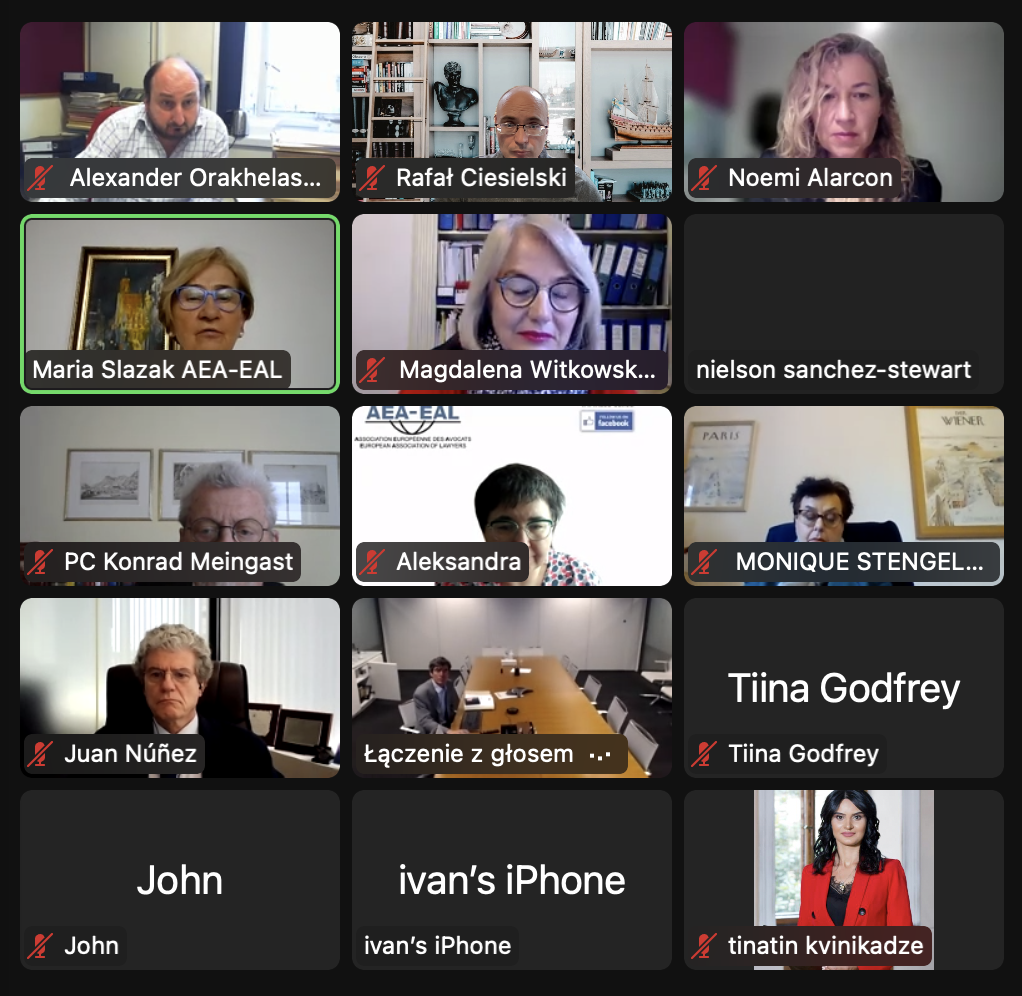 It was a special event organized by the European Association of Lawyers in the context of the ongoing war against Ukraine. AEA-EAL President Maria Ślązak greeted all participants and in her welcoming remarks noted that the war against Ukraine is an unprecedented situation since World War II, imposing serious threats to the human rights, peace and stability in Europe. The speakers: Noemí Alarcón Velasco, Lawyer, Chair of the Migration Committee of the Council of Bars and Law Societies of Europe (CCBE), Professor Marcin Górski, Lawyer, Assistant Professor at the Law Faculty of the University of Łódź, and Doctor Alexander Orakhelashvili, Birmingham Law School of the University of Birmingham, agreed that the aggression initiated by President Putin is an attack on fundamental principles of democracy and a clear violation of international law, including the Charter of the United Nations, the Charter of Paris for a New Europe, OSCE Charter for European Security, and the Budapest Memorandum on Security Assurances. Universally recognized law clearly prohibits the use of force or threat of its use in international relations except for self-defence or acting based on the resolution of the UN Security Council. Both exceptions are not applicable in this context. But also several international conventions on humanitarian law are violated by conducting war against civilians, cities, and non-military facilities resulting with destroying of residential areas, hospitals, or water supply networks. Military actions toward the Ukrainian people caused the biggest humanitarian crisis in Europe since World War the Second. As of March 28, almost seven million people were forced to abandon their homes, while almost four million refugees crossed the Western borders of Ukraine. The societies of neighbouring countries, namely Hungarians, Moldovans, Poles, and Romanians undertook huge efforts to welcome exiles, while the EU institutions and states introduces several legal instruments as well as undertaken other actions to answer the crisis. Doctor Nielson Sanchez Stewart, Lawyer, School of Legal Practice of the Bar Association of Málaga, member of the Board of our Association and main initiator of this event made a summary of the webinar noting that it is our common responsibility to undertake all efforts to stop the war and to help its victims. The event was moderated by Doctor Rafal Ciesielski, the AEA-EAL correspondent member.

We were expecting also an address from a special guest and a great friend of the European legal community, Andriy Kostin, member of the Ukrainian Parliament (Verkhovna Rada), Chair of the Legal Policy Committee, lawyer, former deputy chair of the Odesa Bar Council, and Head of Odesa Human Rights Intake Center. However, on the day of the webinar Andryi was a member of the Ukrainian State Delegation conducting talks with the Russian counterparts in Turkey and could not connect with us this time.