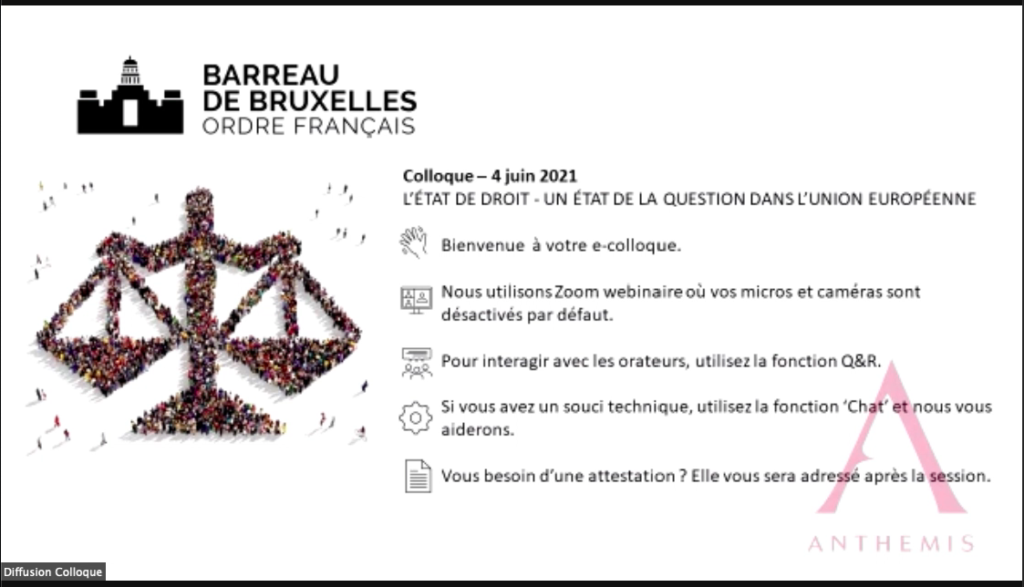 On Friday, June 4, 2021, a very interesting and live debate took place in Brussels, where lawyers, judges and other stakeholders met to discuss the erosion of rule of law principle in the European Union. The discussion followed a Communication from the Commission to the European Parliament, the Council, The European Economic and Social Committee and the Committee of Regions – 2020 Rule of Law Report.

The Document sees rule of law as a well-established principle. saying that “The rule of law is enshrined in Article 2 of the Treaty on European Union as one of the common values for all Member States. Under the rule of law, all public powers always act within the constraints set out by law, in accordance with the values of democracy and fundamental rights, and under the control of independent and impartial courts. The rule of law includes principles such as legality, implying a transparent, accountable, democratic and pluralistic process for enacting laws; legal certainty; prohibiting the arbitrary exercise of executive power; effective judicial protection by independent and impartial courts, and effective judicial review including respect for fundamental rights; separation of powers; and equality before the law. These principles have been recognised by the European Court of Justice and the European Court of Human Rights. In addition, the Council of Europe has developed standards and issued opinions and recommendations which provide well-established guidance to promote and uphold the rule of law.”

Apart from general observations, Commission’s material includes country reports from each Member State. As the main organizer of the colloquium was the Brussels Bar Association (French-speaking), one of the presentations focused on Belgium noticing relatively good situation in the country, however during the discussion some participants pointed out the lack of confidence in political leaders, arbitrary and repressive decisions taken in the context of Covid-19 pandemic as well as problems with overlapping competencies of federal and regional authorities provoking institutional conflicts.

Also, a perspective from the whole EU was discussed with strong voices that safeguards set in Article 7 of the Treaty on the European Union failed. Mainly, due to the fact that role of the Commission as “Guardian of the Treaties” is limited in the area of the rule of law. Pursuant to Article 7, it is the Council that has the final word and as an intergovernmental body, it

can adopt a political perspective, rather than a legal one. Therefore, it is necessary to emphasise specific tasks of the Court of Justice of the European Union, which is entitled to examine the compliance of national law with Community law and thus can protect the rule of law in the Member States to a greater extent than other EU bodies. This role of the Court was presented by the Polish judge Nina Półtorak. Nevertheless, even the best efforts of EU courts would not be effective if the Member States do not enforce their judgments.

We wish to express our gratitude to the Brussels Bar Association (French-speaking) for the organisation of this enthralling discussion and for inviting the AEA-EAL to be a partner in this event.